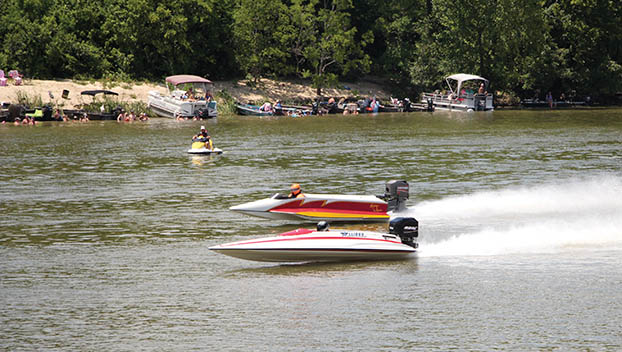 Boats race down the Tombigbee River during the Rumble on the River event in Demopolis.

Rumble on the River deemed a success

The City of Demopolis recently hosted the Rumble on the River event on Saturday, June 13, and Sunday, June 14.

The second annual Rumble on the River saw a large turnout for on both days, with visitors coming from as far away as Florida.

A total of 47 boats raced over the weekend, and each boat raced in a different class. Racers were divided into six classes: Pro Stock, Pro Mod, Unlimited, Lake Racer, River Racer, and V6 Pro. Each class had up to 10 boats that raced on an 800-feet track and ran at over 100 mph.

Paul Sager, an organizer of the event, was pleased with this year’s turnout in audience numbers and boat numbers.

“I was very pleased with how many spectators came out this year and how many boats participated,” Sager said. “Our spectator count increased significantly from last year, and our boat count went up from 34 to 47. We hope to keep seeing those numbers increase.”

Sager said he hopes the event will become an annual event for Demopolis and thanked the Parks and Recreation committee, particularly Walker Reynolds and Amy Wilkinson, the Demopolis City Council and Mayor John Laney for making the event possible. He also thanked the Demopolis Police Department, Demopolis Fire and Rescue, and the U.S. Army Corps of Engineers for helping the event run smoothly.

The winner’s bracket for the race is not yet available.